Heading north again, as we do every summer. Mirroring the paths of the migrating birds who also head for the islands. They travel far more efficiently than we do, laden as we are with tents, stoves and a collection of coats and hats. They soar on the wing, using the motorway thermals and road kill for their own ends. As we trundle north, in a queue near Preston (always Preston), I envy the lightweight ease of the birds overhead.

But the roads do open up and we find ourselves by harbour in Oban, watching the ferry’s come and go. The familiar queue at the seafood shack snaking it’s way along the quayside. It’s become a familiar routine, the slow ferry queue and the dash for essentials that we might not be able to get on the island (food, drink and a haul of books) but the excitement is always the same.

Finally we are away. Despite already being on the road for a couple of days, it’s only now the holiday feels like it’s begun. The ferry slides up the Sound of Mull, past the Lismore lighthouse, which is always a marker for our trips this way. Then beyond Duart Castle and the brief glimpse of Tobermory as we head for open water. We swing away from Mull and a school of dolphin jump in the swell below the boat. The four of us (not to mention the dog) settle down to another few hours on the ferry, broken by expeditions round the deck and fetch provisions from the CalMac cafe.

The boat slows as we find the slightly smoother water and shelter of Castlebay. We shake the tiredness out of our legs and join the cluster of passengers in the afternoon sunshine to watch the castle come into view. Low clouds hang over the little town, and in the distance we get our first glance of the white sand beaches of the Island.

Over the next week those white sand beaches will be our daily destination for a swim or to launch a “sit on top” kayak. Afterwards in the photos the water will look fake, too blue to be real.

All that is yet to come as we dash down to the car deck. Our thoughts turn to the camping gear crammed into the car, and the drive past the beach runway of Barra airport up to the campsite at Scurrival which will be our temporary island home.

That moment when you let go of the saddle and instead of swerving off to the left or right they glide forwards, feet whirring almost in a blur.

When our eldest Vi learned to ride her bike, it was a slow and painful process. I’d bought a heavy old bike off eBay. At that the time we lived at the end of a cul-de-sac. On a Sunday morning we’d go out and try to get her riding on her own, but it usually ended up in both of us getting frustrated. Bike on the floor. Tears. Shouting. She can ride her bike now. We soon got rid of that clunky old bike for something more lightweight and easy to manoeuvre.

A few years on and it’s Hazel’s turn. Full of gung-ho enthusiasm to emulate her sister. We don’t live on the ‘banjo’ anymore, instead there’s a few quiet village roads which have served as good training. Hazel wobbling along with me running alongside. Grabbing the saddle as she veers towards the curb. Almost there, but not quite.

Easter time and we are away on holiday, staying on the old Stanegate. There’s some traffic during the day to the Roman fort of Vindolanda, but after closing time there’s no traffic at all. After a few test runs she’s racing up and down the Roman road. Over the next few days we find a few different routes. A disused railway in Kielder Forest and a dedicated trail at Wallington. But it's the deserted Roman Road each evening that's the favourite.

Looking west from Haunn, Mull I can see the island of Coll across the water. The weather always looks slightly better over on Coll, the sunset brighter, the beaches a golden streak across the dark island.

And beyond Coll, the Uists, connected, almost to the conjoined isles of Harris and Lewis. There is always another island.

Which creates a slightly uneasy feeling, an unrest. A glance at the ferry times, thinking about the logistics. In the same way some people feel compelled to cycle up alpine passes, bag Munros or tick off indian provinces, the very existence of un-visited Hebridean islands creates some kind of implied experience vacuum.

Until perhaps you reach St. Kilda, the edge of the world, just Greenland to keep it a distant company.

But this is really a flat earth approach to island hopping, where the horizon represents the edge of the known world. A spherical planet surely means that there is always another island, near, far or unreachable. 46 species of birds, we spotted in a week in the highlands

In no particular order:

But when the sun shines and you have time to sit, relax and observe it is a landscape with power and beauty that slowly reveals itself; the abundance of bird life and wild flowers, the way the light changes and plays on the hills of the nearby Torridon mountains, the persistent call of the cuckoo and the sudden appearance of a young deer.

We will be back. An autumn day on the west coast of Mull. It’s been wet all week and the desire to sit by the wood burner with a book and wine has been anchoring us all to the sofa.

But today it’s bright and clear, though the wind that’s bringing the change of weather is wiping down from the artic with an icy core.

Treshnish point is a rare corner of our nation of islands. Probably continuously inhabited for the last 6000 years, it wears the impact of human endeavour lightly. The landscape shaped by a mix of people, farming and the elements that sometimes pummel the exposed beaches and clifftops. There’s evidence of old sheep pens and landings as I walk beyond the last cottages at Haun. 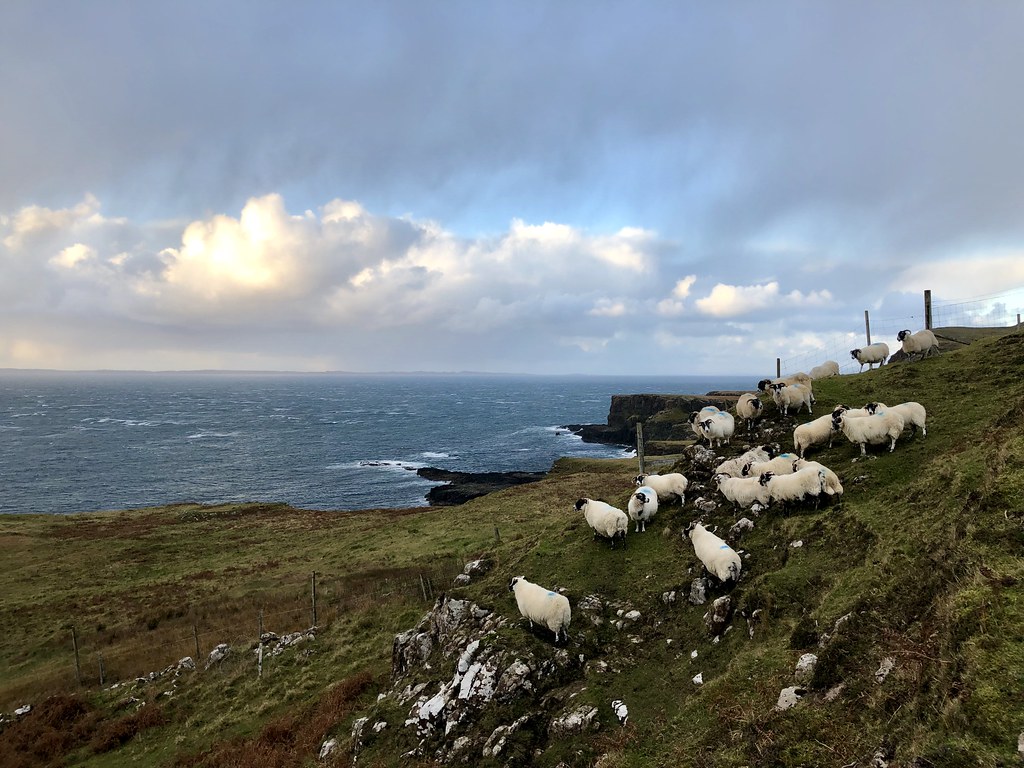 In late autumn the wild flowers that I’ve seen here are in retreat but the grasslands that foot the rocky steps are punctuated by a variety of fungus and mushrooms that stand out with their red and yellow marks against the bright greens and moody greys of the landscape.

With the wind behind I’m blown down the winding track past the rocky coves and rock stacks that look out to towards the twin islands of Coll and Tiree, and the carved presence of the Treshnish Islands. The ground is a little boggy underfoot in places, the result of a wet end to autumn. 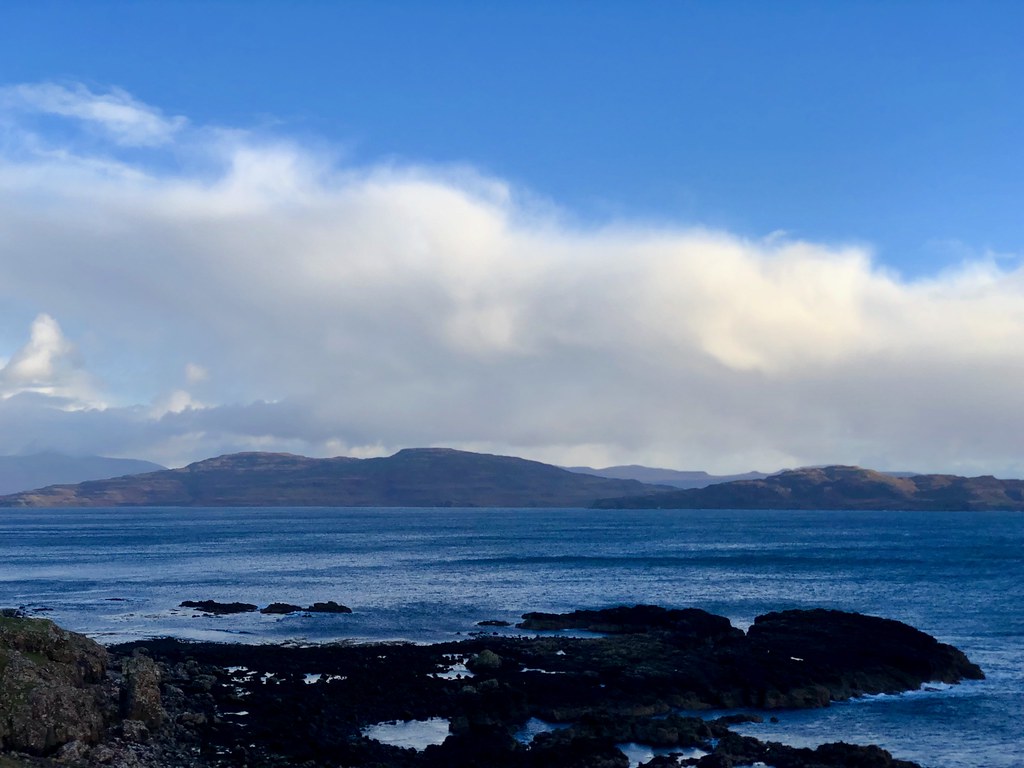 On along with the coast watching the huge waves crash into rocky stacks and across small pebbly beaches punctuated with small caves and dark black rock pools. As I round the corner, the vista opens up. The islands of Gometra and Ulva nestled into Loch Tuath. At first glance the two islands look like one, but on closer inspection the small gully between them is just visible in fading light. In the distance hidden amongst the clouds Mull’s own Monro, Ben More forms a brooding backdrop. Tomorrow the first snows of the winter will dust the tops, but today the mountain looks grey and austere.

A few minutes trying to soak it all in and then I turn, stoop into the wind and battle back along the headland to the comfort of the fire. Nearly 7 years on and we are back at Rhyd Fudr. This time there’s four of us, and in the time that’s passed it seems that it is only us who have changed. The hills, houses, lake, rain and mud seem timeless.

But that’s not quite true. This time the sense of Wales being a separate country seems more acute. Perhaps, it’s the strident debate that’s escalated after the EU referendum, which in the media is played out with England and the UK as interchangeable concepts. Slightly out of season In North Wales, away from the crowds we are routinely mistaken for people who speak Welsh. There’s a lack of big chains in the small towns and villages. Even the Gin is made differently.

More than last time we were here, this corner of Wales seems like an escape.